Regardless of the specific ingredients, the overall spectrum of the quality of relationships, from bad to good, goes from unhealthy/dysfunctional–of which there are also myriad varieties–to True Love, that most rarified, desired, vaunted form of romantic connectedness that joins two people in a way that simultaneously blurs the line between them yet bolsters them individually, that only gets more exciting, deeper, and more heartlifting, more amazing over time. And while there are varying degrees of being in a romantic relationship there are really only two possible statuses: in one or not in one. 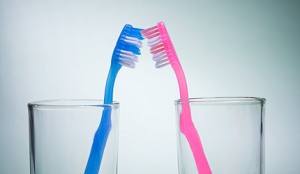 If you believe that True Love is not only possible, but possible for you–if it’s something you t insist on having in your life, then there’s only one route to take: Everything or Nothing. Defining what and who you want as your ideal romantic partner and refusing to compromise is the only way to get to Everything. Concepts like “enough” or “good enough” need not apply, as they won’t get you there. Equally important: knowing who you are and being willing to offer Everything fearlessly and authentically.

There’s long been a movement out there in the Self-Actualization universe revolving around the concept of learning to want what you have. Outside of the one relationship scenario where this strategy makes sense, namely the case of not having previously grasped that what/who you have actually does represent your Everything, so you come to the realization that you actually already do have exactly what you want, actively accepting less is a surefire pathway to disappointment. Granted, it may take years, even decades, for the realization that your relationship isn’t an Everything relationship to set in, but given how brief our time is, is spending any more of it than necessary in a relationship that you know is somehow lacking really the best approach? (this topic will be further explored in an upcoming post)  I suppose that depends on your priorities and your sense of what you deserve.

My pathway to my relationship Everything is an interesting and circuitous one. It involved a late start with respect to sex (virginity lost junior year of college), a first love that led to marriage, then parenthood quickly followed by divorce. Then a near-miss with marriage to the wrong woman. Followed by a more-than-five-year period of dating and not dating, that chunk of time most notable for my having only at the very end of it defined who it is that I want as a romantic partner. Sometimes I look back in amazement that I dated sporadically for over five years without having defined who and what I wanted in terms of a woman and a relationship!

In retrospect it’s absolutely no surprise to me that I didn’t find my relationship Everything until after I–duh!–defined it. Then, probably about six months later, a woman walked into my life who embodied it to a tee. She and I now reflect on the two chance encounters that set in motion our eventual togetherness, how strong and heartlifting our connection was from the very beginning. Strong enough to power us through complicated and at times trying circumstances. As I write this post we’ve been together for eighteen months, and our connection continues to grow and deepen, our excitement about being with each other, our wonder, sense of awe, and gratitude about having found each other, continues to go only one way: up. And that’s the only way it will go, forever. About that neither of us have any doubt.

The Love of My Life, Lien, and I are living proof that it’s possible to have your relationship Everything. If you’re not in a relationship and feel the beck and call of True Love, sensing in your heart that it’s out there for you, the first step is to define who you are, and the next is to define who and what you want, what you deserve, romantically speaking. Then think about the latter (who/what) nonstop. Visualize it, dream it, manifest it. And trust that it will happen. Your unwavering conviction and certainty will ensure that it does. Then be willing to give Everything, knowing that it’s the contentedness and bliss associated with that–the giving–that will create the environment for your partner to do the same, each of you offering your unique gifts in a selfless, fearless way, without expectation of any return or reciprocation. It’s this that nourishes True Love, that allows it to be ever expanding, ever deepening,

If you’re in a relationship and have come to the realization that your partner and the situation do not represent an Everything dynamic, and never will, you have to decide whether or not following your heart, pursuing and realizing Everything, will ultimately be the rising tide that lifts all proverbial boats (like your responsibility to your kid/s, for example).

Basically, reduced to its essence, it becomes a choice between hope and fear. How do you want to live your life? You can fear that your decisions will have negative ramifications for you and those you love, or fully believe, to the deepest part of your core, that hope, specifically the hope for penultimate Love, will lead you to exactly that, and touch every part of your life in amazing ways.

To me, it’s a no brainer. And it’s that positivity, that unwavering certainty that Everything is possible, that compels me to write about what I’ve been lucky enough to experience, hoping that doing so might in some way help others realize their Everything.

4 thoughts on “Everything or Nothing”