As a guy, clearly it’s an ego stroke (self-applied) for a drop-dead-gorgeous woman you’re dating to register the fact that you were previously involved with another attractive woman (or women). On one level this can be a positive, even productive bit of knowledge, since to a certain extent it can be validating of her attraction to you. But don’t overdo it. Also—and it hopefully goes without saying—specific mentions of sex you had in the past could turn into a minefield you may find yourself trapped in for a while.

At a certain point in time in the development of a relationship characterized by True Love, any topic can be discussed openly, productively and in a way that further fortifies your connectedness, but even in cases of True Love, the establishment of a safe, loving, accepting, honest environment wherein both parties are at liberty to discuss anything typically doesn’t happen overnight. 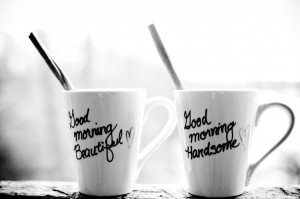 Does this imply that you should plead the 5th if asked about past relationships? Absolutely not. Just be mindful of the possibility that, although it’s not entirely rational and is typically sub/unconscious, a woman you’re getting serious about may—understandably, as she is, after all, a complex emotional being—on some levels want to believe that she’s the only woman who’s ever mattered to you, whom you’ve loved, etc.

Additionally, the more praiseworthy you are of your exes, in whatever regard, the greater the chance that she will wonder about the sincerity of your praise for her in those areas…or your lack of praise in those areas. Or whether your attention might be diverted by someone else who’s strong in those areas.

Likewise, we guys can be susceptible to these perfectly natural feelings and insecurities. After all, we want to be special, to stand head and shoulders above those who came before us and be so perfect for our prospective soulmate that there’s no chance she’d ever be open to the temptations of another guy.

But I submit to you that wishing your beloved had never loved anyone before she loved you, or that she never had sex before you, or climaxed with another guy—or a boundless number of other actions/thoughts/feelings that are important to you—is entirely and utterly counterproductive.

Think about that for a moment.

So rather than harbor any negative feelings or insecurities about her past, you should (privately—no tee shirts!) be thankful for and genuinely celebrate it. And while the reverse also obviously applies, again, use good judgment and sensitivity when covering this type of potentially loaded ground, especially when your relationship is “early days.”