A while ago I came across an image online somewhere, possibly in my Facebook News Feed–a flowchart that really captured my fancy. A simple prescription for how to live your life. There are, of course, myriad ways to do that, but for the most part they’re all gradations of two fundamental alternatives: positive or negative. Ergo Abundance or Scarcity. Ergo Hope/Love or Fear.

There are many versions of this flowchart online–so many it’s virtually impossible to assign credit properly.

The idea behind the flowchart is appealingly, elegantly simple: influence and affect the things you can and don’t sweat the rest. This resonated with me, so I printed out a couple of copies, putting one on my fridge, another on the wall behind my desk.

Over my adult life I’ve had the sense that we as individuals have much more control over the way our lives unfold than we think. That we’re not all on preordained tracks, playing out Destiny, Fate, or the like. We’re not passive characters in a play of someone or something else’s creation.

Without a doubt the biggest validation of this notion I’ve ever experienced is my relationship with my soulmate, Lien. It took me until my mid 40s, after a long marriage, newfound singledom, an almost-second marriage, and years of sporadic dating to define who and what I wanted in a woman. When I’d (finally!) done that, I believed with all my heart and every fiber of my being that she and I would meet and fall head over heels in love. Less than a year later that’s exactly what happened.

As a lifelong rational thinker, a subscriber to mainstream scientific consensus enamored by the irrefutability of logic, for the bulk of my life I didn’t have much use for mysticism and woo woo stuff. Although I didn’t have anything against it or against those who chose to believe in things I felt to be far fetched. To each their own. Live and let live, yo.

But then I met and fell utterly, completely in love with the woman I envisioned having in my life, and vice versa. That experience, so profound, cracked my mind wide open to thinking I’d honestly been indifferent to prior. There’s an old adage to the effect of “when the student is ready, the teacher will appear.” My experience had made me ready, and led me, if not so much to a specific teacher, to an overall school of thought.

Meeting with a friend and one-time professional colleague, who recently published a well-received Young Adult novel, I described for him the sensibility I was looking to realize with a book project of my own, a creative nonfiction work about relationships and love. (to be published next year) He suggested I check out a particular book he’d read, in which he felt that the author did a solid job approaching somewhat weighty/heady material in an engaging, generally breezy, witty, humorous way.

So I picked up a digital copy of the book and dove in. While I felt his assessment to be spot-on, I quickly found myself not so much analyzing the composition of the book but becoming increasingly enthralled by its subject matter. The book is E² by Pam Grout. The basic premise: we all have the power to actualize what it is we want in and for our lives. E² referenced another work on the subject, The Field by Lynn McTaggart, a somewhat more cut-and-dry, analytical yet wholly compelling exploration of the science behind the power of Intention. I devoured it, ravenously.

Both of these works validated and codified a sense I’d long considered but hadn’t fully owned. Up until the point when I’d read the books, I concurred that the flowchart above had it exactly right. These impactful books, however, made me look at the flowchart’s implied life philosophy through a different lens–the result being that it no longer felt like an axiomatic truism. Rather, something only half right. 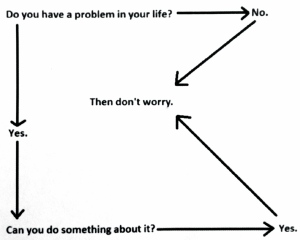 In my case it was romance that initially prompted me to espouse this disposition, to make it my modus operandi. I knew what and who I wanted in my life, and decided I wouldn’t compromise on that. I’d either have Everything…or I’d have nothing. I can’t convey strongly enough how important it is to inhabit, to own, to occupy the life philosophy implied by the above. Not only when it comes to romance and matters of the heart, but to life in general.

It was my complete belief that I’d be fortunate enough to experience and enjoy my Everything (and as a major component of that give her Everything, too) that led me to that very destination. My gut, or perhaps more accurately my heart, guided me. At the time I didn’t fully understand the intellectual underpinnings of what I was doing, but that didn’t matter: somehow I just knew I had to do it.

And the heartlifting, energizing, permasmile-inducing result of that determination is what retroactively engendered understanding of the process, as well as the awareness of and unwavering belief that you can always do something about it. That positive proactivity will shape your reality.

Probably close to ten years ago, my dear friend Robert Morgan Fisher, an immensely talented Narrative Engineer whose wheelhouse includes fiction and non-fiction, songwriting (and performing), and screenwriting, gave me this page from a New Yorker desktop calendar. It’s occupied front-and-center real estate on my fridge since the day he gave it to me.

When you fully own the conviction that you can always proactively do something about “it,” whatever “it” happens to be, the idea expressed in this simple, uplifting image resonates even more deeply.